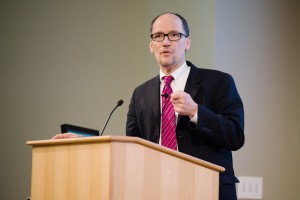 This post was written by Emily Silman, a first-year Duke MBA student and a member of the Fuqua chapter of the Net Impact Club.

Government and business: to many people, these two entities mix about as well as oil and water. So it may have seemed surprising to some that the closing keynote speaker at Duke’s 10th Annual Sustainable Business and Social Impact (SBSI) Conference was Secretary of Labor Thomas Perez. However, despite what skeptics might think, Secretary Perez is a politician who is unequivocal about the role of business in society to be a force for good. He spoke passionately about the connection between a company’s success and the way it treats its employees, noting that “socially responsible businesses prosper not in spite of doing good, but because they are doing good.”

Central to Perez’s stance on socially responsible business is the idea of “shared prosperity”, which he advocates in the large majority of his speeches. In fact, the idea is so central to his goals for the Department of Labor that one could call it his mission statement for his tenure in President Obama’s cabinet.

For Perez, “shared prosperity” means an economy where everyone succeeds, from a company’s lowest-level employees all the way up to its board of directors. He disagrees with the notion that the only way for a company to grow is through low wages and he “categorically rejects” the idea that businesses must make a choice between taking care of shareholders and taking care of its workers.

This is not something he is alone in espousing: Perez stated that both he and President Obama believe that “we all succeed only when we all succeed,” and quoted the President’s 2015 State of the Union speech:

“Will we accept an economy where only a few of us do spectacularly well?  Or will we commit ourselves to an economy that generates rising incomes and chances for everyone who makes the effort?”

Perez backed up his stance by citing a recent Standard & Poor’s study showing how income inequality reduces GDP growth. For anyone looking at the U.S.’s current income inequality ratio and our lackluster GDP growth, it’s a connection that is hard to deny.  Although Perez commented on the impressive job growth during the last few years, he noted that it’s still not enough, and that we need to capture that momentum to further improve job creation and economic growth for all:

“…while we have the wind at our back, we still have a lot of work to do… Our task is to create shared prosperity from that tailwind.”

He then cited two examples—one historic, one modern—of companies who have seen tremendous success from treating their workers equitably, a success which then goes on impact the rest of the economy. The first example: Henry Ford and the Ford Motor Company.

Stated Perez, “when [Henry Ford] doubled wages, he did it because he realized that job creation is a joint venture—when people have money in their pockets, they spend it.”

The second example: the famously employee-friendly Costco. At Costco, “employees earn about 40% more than comparable stores, and sales per employee are almost double that of their competitor, growing at an almost 25% higher rate.” 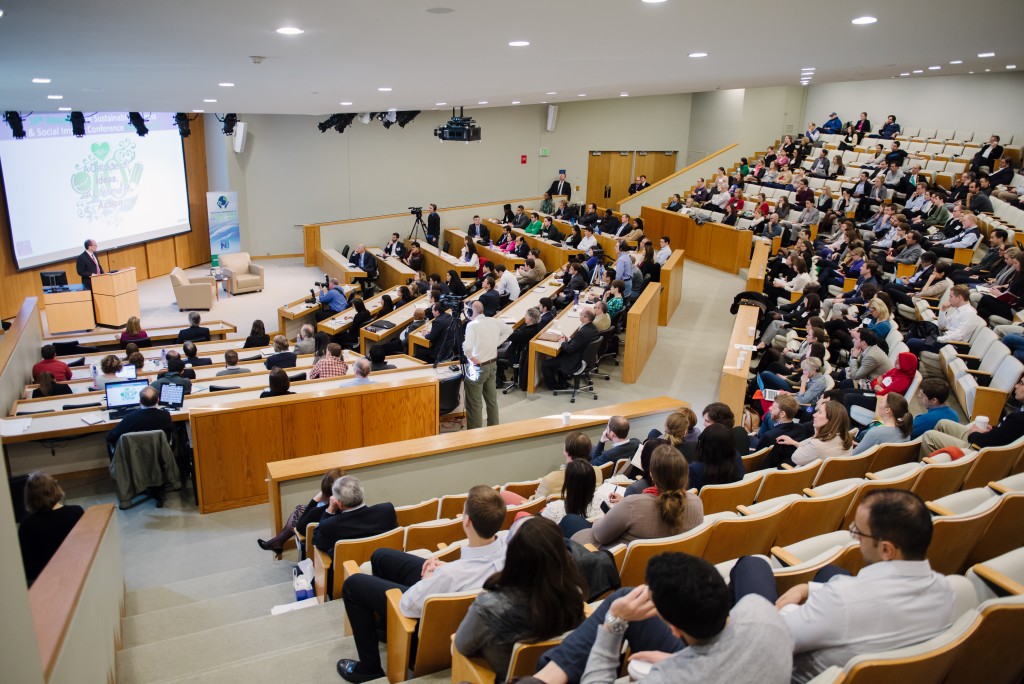 He connected these examples to a lesson that his parents had taught him growing up, which is that “the mark of success is if you build shared success”.  Both of these companies succeeded because they embraced the idea of shared prosperity– treating their employees as stakeholders and recognizing that paying them a fair salary ultimately helps the economy as a whole.

As part of his passion for the idea of shared prosperity, Perez has become an ardent proponent of B Corps, and even attended the B Corp Champions Retreat last year in Burlington, Vermont. While there, he visited a local B Corp in my hometown, Rhino Foods, and later in his speech remarked on how much he enjoyed talking with their employees during his visit.

“I’ve never met an employee of a B Corp who wasn’t fiercely loyal to their employer”, Perez noted.

He drew a distinct line between the core ideal of shared prosperity and the kind of business success created by B Corps. Calling on attendees to work for or create B Corps of their own, he noted that “we have an important opportunity to put our values in action in a way that’s also conducive to bottom line benefit.”

What made his speech hit home for us Fuqua students, however, was the importance he placed on leadership as a tool for bringing about shared prosperity. It will take strong leaders, he said, to make the changes we need to see in the business world.

“The staircase to shared prosperity will only be constructed if we have leaders who understand that we need a stakeholder economy,” noted Perez.

He contrasted this with businesses that get mired in the “quarterly vortex of short-term returns”, and illustrated the challenges facing leaders who try to do the right thing by recounting a recent conversation with a Fortune 100 CEO who expressed frustration at how hard it was to look long-term. One company making tremendous progress in this area is Unilever, which has now revamped their reporting to do away with quarterly profit reports, and this momentous change can undoubtedly be attributed to the trailblazing leadership of CEO Paul Polman.

Perez closed out the speech with, of all things, a homework assignment for the attendees.

“Write your own obituary,” he urged us. “Reflect now about what you want your legacy to be. At the end of your life, you want to measure yourself by how many people you helped. I hope you’ll write that you lived a life of purpose, and in the tradition of this great business school, that you were a leader of consequence.”