A Summer Interning in Social Impact Bonds and Healthcare 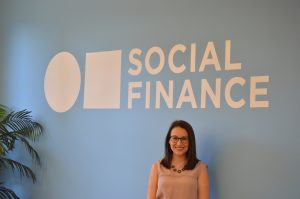 My journey to a summer spent at Boston-based Social Finance, a nonprofit that specializes in the development of a specific type of impact investment called social impact bonds, began long before I became a Fuqua MBA. As an undergraduate, I had the privilege of attending Brandeis University, a small liberal arts school outside of Boston with a powerful social justice mission and an activism-oriented student body. I studied economics and minored in gender studies.

Dabbling in diverse social areas during my four years (working with survivors of domestic violence, advocating for custodial workers’ rights, writing for a microfinance publication), I found it difficult to pick just one area of social justice that mattered to me more than another. It wasn’t until my senior year that I considered advancing social justice by working for a foundation. I graduated college with a plan: I wanted to work on a myriad of social issues through the lens of giving.

However, it wasn’t going to happen right away. I needed to gain industry expertise before anyone would actually pay me to give their money away. Healthcare seemed the perfect choice: in a dynamic, quickly changing industry that accounts for around 17% of our nation’s GDP, there was much to learn and contribute. After four instructive years working for New York’s largest nonprofit healthcare system, I was ready to get my MBA, leverage my knowledge in healthcare and make a graceful pivot to a large foundation.

Fuqua was a great fit for me. Resources like CASE (including pursing a CASEi3 impact investing consulting project and being a CASE Fellow) have proved invaluable as I’ve continued to test the waters across the impact space. And, as the saying goes about best laid plans, mine was meant to go astray (for the better!). I discovered that foundations weren’t the only way to conceive of large scale, cross-sector impact.

In fact, they were a very small piece of a large and exciting pie!

Through my social impact curriculum, I was naturally drawn to impact investing. I was interested in looking at financial vehicles that could catalyze social change and have an effect far greater than a one-time grant. My journey led me to pay for success (PFS) broadly and social impact bonds (SIBs) more specifically.

A social impact bond is a public-private partnership between government (often a state or city), service providers, and impact investors that funds effective social services through a performance-based contract. The government identifies a problem it wants to address, such as recidivism, and partners with an effective service provider to tackle the problem. Impact investors provide the upfront capital to scale services. Project outcomes are tracked and measured by an independent evaluator and if the project achieves its target outcomes, then the government repays the initial funders, through savings and value realized by the program as people stay out of prison.

When the projects work, all parties win: service providers access flexible, upfront capital to scale, government pays only for realized social outcomes, investors receive their money back, plus a modest return, and most importantly, people in need have access to better services.

The concept intrigued me: I knew I wanted to learn as much as possible about this promising intervention. Organizations like Boston-based Social Finance sit at the nexus of these deals, acting as intermediaries and consultants to each stakeholder. Not only that, Social Finance has sister offices in the U.K. and Israel, and is therefore able to leverage global best practices in the PFS space. When I was choosing where to go for my precious MBA summer, Social Finance was a no-brainer.

My background in healthcare finance proved crucial to my work at Social Finance. Although I had a number of incredibly interesting projects on my plate for the summer, my main project was to conduct a feasibility study about pediatric asthma interventions for five different jurisdictions. Specifically, what were payors’ incentives for engaging in a PFS agreement with a particular nonprofit? Which funders aligned best with this initiative? I developed tangible deliverables at the end of the summer that would be used for potential future SIB deals.

I couldn’t have asked for a more educational summer. I was surrounded by brilliant, cognitively diverse individuals, who were all driven by curiosity and a staunch desire to make the world a better place than they left it. The spirit of camaraderie and each person’s commitment to transparency were apparent from day one, and truly never wavered.

I learned more in ten short weeks than I ever thought was possible. Now, I feel well-positioned to start off my second year at Fuqua strong and armed with the knowledge I’ve gained this summer. Thank you to Social Finance, CASE and SIF for making this summer possible for me.

The Summer Internship Fund (SIF) enables first year Duke MBA-Daytime students to learn about the rewards and challenges of social sector management without making a significant financial sacrifice. In addition, the program enables organizations that otherwise could not afford to hire MBA student interns to benefit from students’ expertise. The SIF has supported more than 170 students, distributed nearly $520,000, and helped to further the mission of many nonprofit and government organizations. Funds are raised through student fundraising and from donors who believe in the mission of the program. If you would like to contribute, you can donate online using your credit card.