Giving a Voice to “Invisible” Children

On September 22nd, CASE Advisory Council member and Global Fund for Children founder Maya Ajmera joined us for the CASE Executive Speaker Series: A Lens on Social Impact. The event was co-sponsored by CASE, the Duke Center for International Development, and the Duke Innovation & Entrepreneurship Initiative. 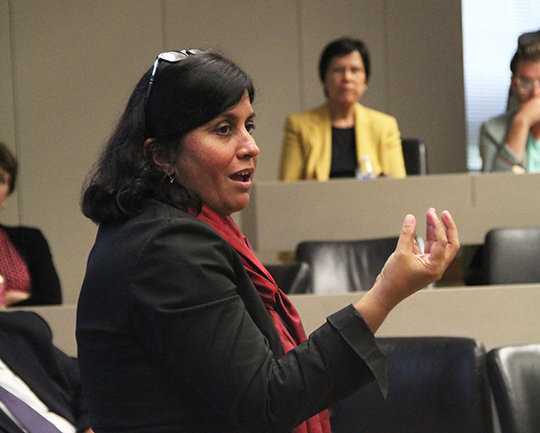 The founder and former president of the Global Fund for Children called invisibility “a lack of hope, a lack of opportunity and a lack of access.” Nearly half a billion children live in extreme poverty, 215 million are engaged in hazardous labor, 100 million live on the street, and 1.2 million are trafficked annually.

In her new book, Invisible Children: Reimagining International Development at the Grassroots, Ajmera argues that the global agenda meant to save these children has failed them instead. By focusing on very specific missions and objectives, large NGOs are neglecting children’s overall needs.

“Children are being siloed and put into little boxes when we think about the programs that are created for them,” she said. “If you’re truly going to meet the needs of poor children, you have to offer wraparound services. You have to think holistically.”

The groups that do this most successfully, she said, are grassroots organizations.

She told the story of when she traveled to Bhubaneswar, India, on a Rotary Foundation fellowship at age 22. While walking on the train platform, she saw a small gathering of children learning to read and write. She approached their teacher and learned that the children lived on the platform and had no opportunity to go to school.

The teacher told Ajmera that a local grassroots entrepreneur had decided that the children needed a school where they lived, worked and played. For only $500 a year, the “platform school” was able to support two teachers and around 50 children.

“What was most amazing to me was that the kids weren’t just getting an education,” she said. “They were getting a hot meal, medical help and vocational training. It provided all the things a child needs to be able to thrive.”

Creating change on the ground

Ajmera launched the Global Fund for Children in 1993 to invest in small, locally led organizations that are working to transform the lives of children living on society’s margins. Since its inception, the fund has invested nearly $40 million in more than 600 innovative community-based organizations, touching the lives of over 10 million children in nearly 80 countries.

The fund began supporting grassroots entrepreneur Sakena Yacoobi in 1998. Yacoobi had asked for support in her efforts to coach mothers in Afghanistan on how to teach their daughters in secret after the Taliban made educating girls illegal. Today Yacoobi reaches 450,000 mothers and children throughout the country, providing both education and health care.

One of the things that distinguishes Yacoobi from traditional Western international development organizations is her knowledge of the culture and setting in which she is operating.

“I tend to cringe when I hear a Westerner say, ‘I’m going overseas to build a school,’” Ajmera said. “I worry about sustainability, I worry about the social and cultural context, and I worry about [the motive].”

Perhaps most importantly, she said, grassroots entrepreneurs have conviction and a steadfast commitment to their communities.

“When we look at these entrepreneurs, we see a very strong ethical fiber,” she said. “They’re going to do this work anyway, whether we give them the money or not.”

Scale up or scale deep

Another important part of the book, Ajmera said, is redefining “scale.”

Many base the success of entrepreneurs on their ability to scale “wide,” Ajmera said. She rejected the notion that spreading an idea across countries and national borders was the only type of scale.

“We can also scale by going deep,” she said. “That means if you’re reaching 100 kids, maybe you can reach 1,000 kids in that same community.”

In addition, entrepreneurs can scale “up” by building awareness and advocacy. By changing people’s behaviors and minds, they can begin to change policy.

Borrowing a term from the first President George Bush, Ajmera referred to these grassroots organizations as a billion “points of light” that are deriving an increasing amount of power from the network that is being built among them. Creating these links is where donors and traditional development organizations have been doing a terrible job, she said.

“We need to be thinking about how to bring these groups together, help them work with each other, and create a collective voice to inform on public policy,” she said.

What can be done

Ajmera made several recommendations for empowering grassroots organizations, including more investments, more research on outcomes, and more agencies serving as a voice for community-based organizations worldwide.

She advocated for establishing a new U.S. agency, the Children’s Global Investment Trust, to reach out to grassroots organizations directly and more efficiently. She also recommended an individual child advocacy organization and an ambassador-at-large at the State Department to call attention to issues facing children.

Finally, she called on corporations and philanthropists to increase their support of grassroots organizations to make the biggest difference to vulnerable children.

“The enormous amount of wealth that’s been created globally gives you the chance to direct resources in a way that was never possible before,” she said. “The talent is there; it’s the resources that are needed.”