Networking Impact: The Power of Networks as a Means for Social Good

Social networks can be powerful vehicles on the road to success. Today, most people define a social network by Facebook, Twitter, LinkedIn, or any of the other apps we use to connect. However, social networks are so much more than these. They are vast and consist of anyone you can call on when you need help. You may have tapped into this network when searching for a job or when filling a position at your enterprise. If you have used your network, you know that having a robust network makes all the difference in the push toward fulfilling your goals. But what if you didn’t have this network to tap into?

When thinking about our networks, it is easy to focus on the connections that are most beneficial to us. However, when we look to grow our network, who we seek out can make a real difference in breaking down barriers and creating true social impact.

During the Sustainable Business and Social Impact Conference, we had the privilege of hearing Meg Garlinghouse, Head of Social Impact at LinkedIn, present on social impact from the lens of LinkedIn and networking. What resonated most with me about Meg’s talk was while social networks can be powerful, access to them is not equally distributed.

A 4th Type of Capital 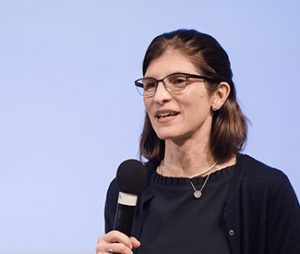 Meg noted that many economists have identified 3 types of capital for a robust economy to thrive: human capital – talent; working capital – money; and intellectual capital – knowledge, ideas, or patents.  She argues that a 4th type of capital is needed for a society to truly thrive, social capital. She describes social capital as, “The networks of relationships among people who live and work in a particular society, enabling that society to function effectively.” Access to social capital is potentially one of the greatest barriers to systemic social change.  If you aren’t born into a social group where access to this capital is readily available, how do you gain access to these relationships? 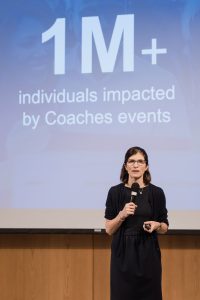 LinkedIn, in an effort to connect undeserved communities to economic opportunity, created  LinkedIn for Good. LinkedIn for Good goes beyond connecting underrepresented groups with job opportunities, they also connect these people with social capital in the form of coaches and mentors.

Tapping into their own social capital, LinkedIn invites users to join with them on initiatives such as the Welcome Talent Refugee Program, the Veteran Mentor Network Group, and the Starbucks Mentor Mondays group.

Meg shared about the success of the Starbucks Mentor Mondays group, a program where they invited a group of LinkedIn users to go to a Starbucks to have career conversations with opportunity-seeking youth and veterans. The response was so great that many users requested expanding the model beyond the initial 16 cities and 20 Starbucks to their home towns.

The Individual’s Role in Networking Change

On an individual level, we can take what LinkedIn is doing and implement it on a smaller scale. Meg shared her “+1” strategy.  The +1 strategy was born from the realization that people requesting informational interviews with her were typically white women from a similar socioeconomic circle and were either 1st or 2nd degree contacts. In an effort to balance her in-network interviews with out-of-network interviews, Meg has committed to interviewing one out-of-network person for every in-network informational interview she has.

Meg invites you to join her by finding your +1 and opening your network to someone who does not have access to the same opportunities. You can share your own experiences with them, but most importantly you can connect them to others in your network.

The Benefit of a Diverse Network

When considering expanding your network, it is important to focus on including different perspectives.  This may include people from different ethnic backgrounds, sexual identities, genders, geographic locations, age, political ideologies, and religious beliefs, among others.

It is well documented that there is a strong correlation between diversity and a company’s success, as shown by McKinsey and Company’s 2015 report on Diversity. Expanding your network to a more diverse group of people is about more than altruism. When we open ourselves up to hearing different backgrounds and perspectives, it gives us a better understanding of the problems we’re determined to solve and the people we serve.

It is easy to find cases where a lack of social network diversity has a negative effect on a group of people.  For example, in the United States, African Americans are more likely to have adverse health outcomes than other groups. This problem was created as a direct result of racism and segregation, and has compounded over generations. Now, only 5% of doctors in the U.S. are African American.  It is more difficult for majority doctors to find solutions to health problems when they don’t fully understand the barriers their minority patients face. With only a small percentage of doctors who have a shared experiential background with these patients, this lack of diversity has had a deadly negative effect.

With the emergence of big data, research medical centers and medical organizations around the world were able to identify this disparity and are working to find solutions, as well as train up a more diverse group of medical professionals, but they have a tall order to fill.  In the case of health disparities, it will take the collective voice of minority doctors speaking to a large homogeneous group of health professionals to help them fully understand the issue and find lasting solutions.

By expanding our network to a more diverse group and sharing our social capital, we are better equipped to be facilitators of change as well as identify and stop systemic disparities from occurring.

Meg spoke of the social gap, or the divide between those with a strong social network and those without.  In order to bridge the social gap, it is on all of us to think about how we expand our networks. To think about how we help others to build social capital and how we can improve the diversity in our own connections. Solving the world’s social and workforce problems seems like a daunting task, but we can begin by expanding our networks to provide more people with access to opportunity.

We might not individually be able to change the whole world, but if we are all in it together we have a better chance.