SBSI 18: A Look Back and A Look Forward

In 1998, Greg Dees authored his influential work, “The Meaning of ‘Social Entrepreneurship,’” in which he described social entrepreneurs as, among other things, reformers and revolutionaries with a social mission. Four years later, in 2002, Dees helped co-found CASE at Duke. At this year’s Sustainable Business and Social Impact (SBSI) conference, Fuqua celebrated the 15-year anniversary of CASE by not only examining the current state of social impact, but also anticipating the next wave of radical change that will be pioneered by the revolutionaries described by Dees.

What I will remember most about SBSI 18 is the quality of speakers and the conversations that went beyond surface-level discussions on impact to deeper questions about our future. 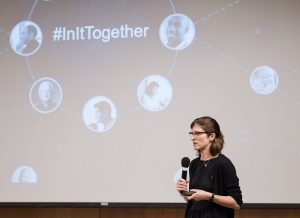 “We have arrived,” stated Meg Garlinghouse, Head of Social Impact at LinkedIn, as she kicked off SBSI 18. Social impact is now a norm, she continued as she highlighted the major trends she sees dominating the modern workplace. Social impact is now a more integrated part of many people’s lives. LinkedIn reports having over 42 million users with social impact listed in their profiles. She went on to explain that we can no longer think of our social missions as separate from our professional identities.

Throughout her keynote, Garlinghouse focused on how we can affect the future of impact by leveraging our social capital to welcome underrepresented communities into our own networks.

I was especially struck by Garlingouse’s humility in taking questions. Specifically, after an audience member asked if she had thought of using technology to break down a set of social capital skills, the social impact giant simply responded, “No…but I would imagine how we could, so I would love to talk to you about that.”

Throughout the day, conference attendees packed classrooms to hear over 40 different panelists engage in discussions about critical issues. All the conversations seemed to have a keen awareness of progress while striving to look to the future. In the morning, one panel highlighted the challenge of measuring the impact of diversity and inclusion in the face of ever-changing standards. Throughout the day, technology permeated the conference as panelists grappled with lofty concepts like distributed ledger technology and artificial intelligence. In the final breakout session, a panel on impact investing introspected to consider the role of Big Money as the field grows.

The biggest name at the conference was one of our afternoon keynote speakers, Neil Blumenthal, co-founder and co-CEO of Warby Parker. The afternoon was not about an individual, though, as the conversation was brought alive by the interaction between Blumenthal and fellow keynote speaker Ella Gudwin, president of VisionSpring. Like the symbiotic strategic partnership linking their two companies, the two speakers highlighted their strengths by exploring the evolving challenges of scale and impact. Since the partnership began in 2011, Vision Spring has provided over 4 million people in the developing world with glasses, with the help of Warby Parker. While this social-corporate partnership offers a promising example for future ventures, Blumenthal and Gudwin cautioned that without shared values and common modality, well intentioned firms can create unintended consequences. 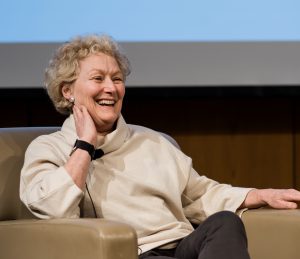 The closing keynote speaker at SBSI 2018, Clara Miller, President Emerita of the Heron Foundation, severely challenged my notetaking skills as I found myself wanting to write down every single word she spoke. She somehow managed to represent the progress of social impact while also serving as a harbinger of radical change yet to come. Miller began by explaining, “Technology and globalization have opened our world well beyond our easy reach” as she urged for new thinking to tackle the “wicked interactive problems we’re facing.” Miller described how Heron revolutionized the private foundation model by adopting a concept she has termed full frontal philanthropy because it mobilizes every asset to work toward the social mission of the foundation. As Miller explained, the worlds of social good and investing are not separate. The private foundation must be “all in” for good. She then closed by asking the audience to eschew similar us vs them mentalities, which stifle social progress.

After an amazing day of engagement and discussion, I am left hopeful about the future of social entrepreneurship. If there is one thing I learned at SBSI 2018, though, it is that the distinction between social good and any other good must be rejected. As Meg Garlinghouse noted, social impact has arrived. So let me rephrase my original statement: I am left hopeful about the future.