Overcoming Bumps on the Road to Scale

No matter the type of organization, the scaling journey often includes bumps in the road. While these unexpected obstacles vary in size and timing, the central question for any social impact enterprise is: will we see it coming and adjust course or will we hit the bump going full speed and fly off the road?

As part of our CASE Executive Speaker Series, Elisa Villanueva Beard, CEO of Teach For America (TFA)  shared some of the bumps the organization faced on their 25+ year journey to scale and what they did to learn from and overcome those challenges. 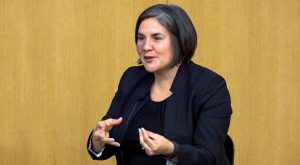 On the path to scale, a myopic goal-orientation can mask impending problems. In 2014, TFA experienced the unintended consequences of maintaining a laser-like focus, when they pushed to grow their incoming corps of teachers over the course of 5 years.

In hindsight, Elisa shared that their focus on numeric growth and simultaneously building a robust mid-level management structure to manage that growth, distracted them from other critical metrics that told an important story about changes and challenges in corps members’ experiences.  TFA’s chosen goal orientation hid their need for a different corps member recruitment strategy. Instead of growing as planned, corps members’ declining experiences contributed to recruitment numbers heading in the wrong direction.

As Elisa shared, “Growth creates complexity and complexity is the show-stopper for growth.” In growing the number of staff to 2000 staff members, TFA had created layers of added complexity that negatively impacted other critical indicators of success.

According to Elisa, identifying the real problem when an organization hits a bump in the road requires stepping back from goals to listen to both data and people. Access to the people on an organization’s front lines is key. Gaining their feedback and understanding their different perspectives can provide invaluable insights into both the real problem and potential paths forward.

Listen to the Data

TFA’s data told the organization that they were missing key opportunities to recruit people into their work, and that once engaged, corps members were not having the same high value experience year over year.   As they dug deeper into the data, Elisa identified two key takeaways, (1) college students were making decisions about their careers before TFA was engaging with them, and (2) if successfully recruited, corps members felt an overwhelming expectation to be superhero-teachers when they entered the classroom.  Pulling these two learnings from the data helped TFA shift critical recruitment and support strategies.

Similar to TFA, Evidence Action is an organization that shifted strategy after hitting a bump in the road and listening to data. Through the Scaling Pathways series, CASE learned that Evidence Action quickly worked to scale their Dispensers for Safe Water program broadly and expand geographically across Uganda. In two years they grew from a pilot of 10 chlorine dispensers to 700.  However, as the dispenser numbers grew, the data identified a problem with user adoption of the system.

Evidence Action’s data indicated that while more chlorine dispensers were available, people simply weren’t using them. User adoption rates fell to 14%, far below the organization’s target goal of 45%. These data were vital to the organization as they made critical decisions about how to best achieve their mission and whether they should continue to grow.

While collecting data is critical, really listening to the data is essential to avoiding and overcoming bumps in the scaling journey.  Don’t forget to take the time to stop, listen, and evaluate the strategic implications of what the data has to say.

Keep Impact at the Center

Moving past a bump in the road often requires the willingness to change in order to keep impact at the center.

According to Elisa, “We weren’t listening hard enough and evolving with the things that really matter.” TFA’s theory of change requires that corps members have a transformational impact in their own lives and on the lives of the students they teach.  In order to continue to scale their organizational impact, TFA needed to refocus its energy on strategies most central to that mission – recruiting and developing corps members in new ways.

Like TFA, once Evidence Action identified the problem presented by their data, they had a decision to make: should they continue to rapidly expand geographically and hope that the adoption rate problem solved itself or slow down and make a mission aligned change?

Because both Evidence Action’s desired impact for improved health through clean water and the organization’s financial model depended on communities actually using the Dispensers for Safe Water, the organization chose to pause their geographic growth strategy.  Instead, they doubled-down on understanding why adoption rates were low and making the necessary changes required to increase them.

Not all organizations successfully navigate bumps on the road to scale, but both Teach For America and Evidence Action have been able to overcome recent challenges through identifying the real problem at hand, listening to data, and keeping impact at the center of their strategic decision-making.

TFA is now back on track and the organization’s critical metrics look good according to Elisa.  The organization spent the time needed to remove unnecessary complexity, and have embraced new thinking and different styles. Specifically, TFA now engages college students much earlier in their collegiate career in order to increase the likelihood of successful recruitment. The organization has also continued to evolve corps member training to better equip these teacher-leaders for the realities of their challenging work, while also combatting the hero-teacher mindset.

If you would like to hear more on how Teach For America achieved the scale they have today, look for the CASE in Point podcast which will premier this fall. You can follow us on Twitter or Facebook to stay up to date.

If you are also interested in learning more about Evidence Action’s Dispensers for Safe Water, read our case study on the Scaling Pathways website along with other case studies on scaling impact. Be sure to also keep an eye out for this year’s deep dives into critical scaling topics such as Financing for Scaled Impact, Government Partnerships, Pathways to Scale, Data, and Talent.