Patient and powerful.  Risk and reward.  Necessary and challenging. 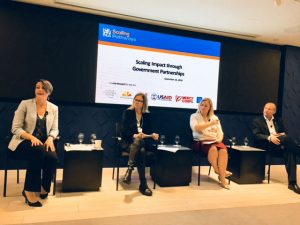 If you had to summarize partnering with government in just two words, what would they be?

Leaders of social ventures Build Change, VillageReach, and TriCiclos shared the words above during a panel session to launch CASE’s latest contribution to the Scaling Pathways series, “Leveraging Government Partnerships for Scaled Impact.”

The Scaling Pathways partners—also including USAID, the Skoll Foundation, and Mercy Corps—came together with the Schwab Foundation in late September to host this UNGA-week event at the World Economic Forum in New York.  Social entrepreneurs, funders, and ecosystem-builders gathered to hear insights on establishing this most critical of partnerships for scale, eager to cull strategies that they could apply to their own partnership efforts.

Find a taste of the stories and insider insights from the distinguished panel below, and be sure to check out the full Leveraging Government Partnerships for Scaled Impact paper for a wider range of perspectives and tactics.

Evolve your staffing to align with your government partnerships strategy

“I am not a marathon runner,” proclaimed Elizabeth Hausler, Founder & CEO of Build Change.  She was referring to the analogy of government partnerships being a marathon—not a sprint—and requiring time and patience to build meaningful collaborations. In Build Change’s early days it employed a reactive model, entering countries post-disaster which required its staff to move quickly.  This type of work favored “sprinters” like Elizabeth and her team.  But as Build Change shifted to a proactive approach of creating disaster-resilient housing, it meant entering countries during stable times (i.e., before potential disasters) and taking the time to demonstrate value and build credibility.  In doing this “slower” work of advocating for changes to regulations and policies, Elizabeth realized that her team of sprinters needed to bring on some “marathoners.”  To move the disaster-resilient housing work forward in Colombia, Build Change departed from its traditional “engineer” hire to an individual with deep roots and advocacy experience in that country, who was able to bring connections and a patient, long-view to navigate the government relationship work critical for success.

Be realistic about the “trifecta”

When working with government partners, there are often trade-offs to account for in planning and results.  Emily Bancroft, President of VillageReach, explained: “We think of the trifecta of scale, sustainability and impact.  And obviously the ideal is that the work that we are doing reaches all three of those.  But we as an organization have had to step back and make a deliberate decision about what we are willing to sacrifice or let go of a little bit in order to move forward.” In her example, VillageReach knew it couldn’t reach scale and sustainability without government partners, so it would have to sacrifice some level of quality in the short or medium-term.  Once VillageReach acknowledged this tradeoff, it could then work toward strategies to proactively address issues of quality, including early collaboration with the government to establish shared goals, co-create models (rather than inserting a rigid model into a new system), and plan (long-term) for the roles and skills necessary for government to successfully adopt a program.

Gonzalo Munoz, Founder & CEO of TriCiclos, recently launched a nationwide partnership with the Chilean government to eliminate plastic waste.  Although TriCiclos as an organization is focused a holistic approach to the problem of waste (including engaging individuals and corporations), it understood that in creating policy with government it needed to identify and focus on just a subset of non-negotiable factors—and be flexible around others so that government could also meet its own agenda.  Gonzalo stated, “We built a culture that is all about the problem that we are trying to solve.  It is not about our organization, our solution, or ourselves.”

Moderator Erin Worsham closed out the panel with one final question:

What is your one tip for the audience around entering into and sustaining social enterprise-government partnerships?

TriCiclos’s Munoz advised to focus on the problem to solve, and work patiently while also being strategic with the resources you put toward the partnerships.

VillageReach’s Bancroft advised that enterprises need to be realistic that such partnerships are a long haul, and require funders and other key partners who will stay for the ride. 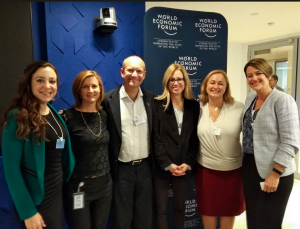 money invested, and advised, “It takes time to build relationships, and patience to create change.”

For more insights, be sure to download Leveraging Government Partnerships for Scaled Impact.

Many thanks to Katherine Milligan and Juliette Bourque of the Schwab Foundation, Elyssa Lewis and Liz Diebold of the Skoll Foundation, Lorin Kavanaugh-Ulku of USAID, and Amanda West and Chris Walker of Mercy Corps for their partnership on this successful event!