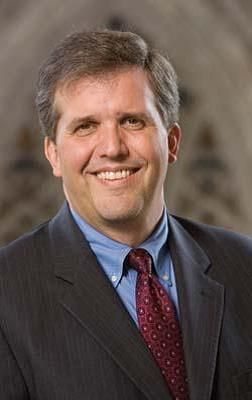 Gregory Jones is a leader and strategist whose creative engagement has helped institutions across the world to create transformational resource models. Greg’s global imagination has guided business, education, and religious leaders in Africa, Asia, Europe and the United States. He has a particular gift for incubating talent, ideas, and networks. He is passionate about re-shaping cultures within and across organizations and has coined the term ‘traditioned innovation’ to capture how he re-frames complex challenges to seize significant opportunities.

Jones currently serves as Senior Fellow of the Fuqua/Coach K Center on Leadership and Ethics (COLE) at Duke University, as the Ruth W. and A. Morris Williams, Jr. Professor at Duke Divinity School, and as Senior Strategist for Leadership Education at Duke Divinity. He also has served in many other leadership roles at Duke, including as Duke University’s Vice President and Vice Provost for Global Strategy and Programs. Greg served for thirteen years as Dean of Duke’s Divinity School (1997-2010) where he led the institution to a significant expansion of resources, networks and impact. Greg is a gifted speaker, a noted writer, and a trusted advisor who helps leaders imagine new possibilities and shape cultures for organizational success and productivity.

Known for his entrepreneurial leadership and fund-raising ability, Jones deanship was marked by significant growth in Duke Divinity School. More than $102 million was raised under his leadership in The Campaign for Duke (1998-2003). Major new initiatives during his tenure included Leadership Education at Duke Divinity, the Center for Reconciliation, the Thriving Rural Communities Program, the Duke Youth Academy for Christian Formation, the Clergy Health Initiative, the Reynolds Program in Church Leadership, and international partnerships, especially with the Methodist Church of Southern Africa, the United Methodist Church in Cote d’Ivoire, and the Center for Reconciliation’s Great Lakes Initiative which embraces the central-east African region. As Duke’s Global Strategist, he led initiatives in China, India, and helped to engage work in Singapore.

Jones is the author or editor of 17 books, including Christian Social Innovation: Renewing Wesleyan Witness in 2016, the co-authored Forgiving As We’ve Been Forgiven: Community Practices for Making Peace (with Celestin Musekura, in 2010), the co-authored Resurrecting Excellence (with Kevin R. Armstrong, in 2006), Everyday Matters: Intersections of Life and Faith (2003), and the widely acclaimed Embodying Forgiveness (1995). Jones, an ordained United Methodist pastor, has published more than 200 articles in a variety of publications. He is an editor-at-large for Christian Century, and writes regularly for Faith & Leadership, the web magazine published by Leadership Education at Duke Divinity.

Greg is also widely sought after as a consultant and speaker. He is married to the Rev. Susan Pendleton Jones, who recently retired from serving as Associate Dean at Duke Divinity School. They are the parents of three children: Nathan, Ben and Sarah, and are grateful for their two daughters-in-law, Alison Jones and Amy Little Jones, and their granddaughter, Clara Susan Jones (born March 8, 2017).