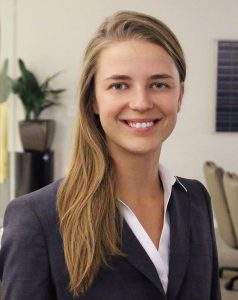 This article was written in response to a presentation given by Katherine Canoy, Senior Manager, Renewable Energy Origination, Walmart in an EDGE Seminar on Oct. 3, 2018 at Duke University’s Fuqua School of Business. This article voices one student’s perspective and does not necessarily represent the views of either Duke University or the seminar speaker.

However, despite these huge gains in corporate renewables procurement, businesses with smaller electricity demands have largely been left out. These types of companies still face problems with procuring and financing projects. More needs to be done to accelerate renewables growth for companies other than the Walmarts and Googles of the world.

Large companies are also coming up with better solutions to localize purchases. Previously, regulations often forced them to purchase power in states far away from the generation they’re trying to offset. In 2017, Walmart signed its first “sleeved” PPA with Alabama Power, allowing the company to buy solar energy at a special rate from the utility to power its local operations.

But what about smaller companies that don’t have the same resources or electricity load? During our seminar discussion, Canoy noted that Walmart aims to be a trailblazer for others. An important part of Walmart’s energy strategy, she said, is forging the path so that suppliers can follow in the company’s footsteps. Walmart’s goal is to improve the system of purchasing renewable energy for all companies.

This is a timely and important task, given that the rapid growth in corporate renewables consumption has been largely driven by an exclusive group of companies with huge electricity loads and the resources to pursue complicated deals. However, policymakers and electricity providers need to play a more active role in improving the landscape for other businesses.

One way to increase renewable energy procurement by more companies is to expand green tariff programs. Utility green tariffs allow companies to buy renewable energy from a utility at a special rate. Right now, these types of deals are typically attainable only for large commercial and industrial consumers of electricity. However, some utilities are experimenting with opening opportunities for smaller electricity consumers. For example, a model by Puget Sound Energy uses a subscriber system to allow many different types of customers to participate in a green tariff model. Companies like REI and Starbucks, as well as several local universities, participated in the pilot version of this program.

Another interesting model that expands commercial access to renewable energy is a power purchase through an intermediary. This method is viable in unstructured markets and entails one company purchasing renewable energy directly from a producer through a PPA, and selling that power out to multiple customers. In a previous EDGE seminar, Burhan Koc, Director of Sustainability & Renewable Energy Solutions at ENGIE described this kind of strategy. He detailed flexible, “custom-structured” solutions that allow commercial customers to procure renewable energy through a contract with ENGIE. NRG offers a similar solution called Renewable Select in which corporate customers purchase renewable energy from a specific project through a standard retail agreement. In another example, Citi served as the intermediary to power a QTS Real Trust data center.

These types of solutions allow companies that are unable or unwilling to procure and finance a PPA to still purchase renewable energy and meet their sustainability goals.

Aggregation models allow a group of companies to team up to purchase power from a renewable energy project at smaller volumes. One company called LevelTen developed a digital platform for aggregating renewable deals and facilitated the joint purchasing of power from one renewable plant for Bloomberg, Cox, Gap, Salesforce and Workday. Combining purchasing efforts allowed these companies to minimize legal complexities and costs while also receiving a lower price than if they negotiated the deal for themselves.

Rapid corporate renewable energy procurement has been a positive trend that has put over a dozen GW of solar online in the past few years. In order for this growth to have a lasting impact, opportunities need to be spread to a larger group of businesses. Renewable energy procurement is still too arduous a process for many companies. Policymakers, electricity providers, and other stakeholders can take steps to make it easier.